The Healing Power of Living Mandalas 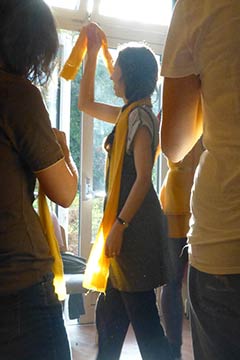 Mandalas are very beautiful, aren't they - Tibetan ones especially so. And you probably know something about how mandalas are used as aids to meditation, providing maps to and invocations of higher reality.

But imagine how it would be if you were actually inside one. And if it were not still but moving; not two dimensional, but multidimensional; not silent but resonant with glorious sound - your own sound; not just colourful, but vibrant with inner light; not made of sand or paint, but of living, breathing, loving humanity. How would you feel? What revelations would you receive?

Well, believe it or not, you can have that experience, in the modern world, right here in Britain, and that's what happened to Geoff and I last week when we attended Jill Purce's Healing Voice week-intensive. We knew we were going to learn to do overtone chanting and do some healing work, but we had absolutely no idea of the utter awesomeness of the experience we'd signed up for.

We did indeed learn and practise overtone chanting for the first two days - we were able to do it, but practice is important. To start, you sing a note (a lowish one is better because then the overtones are more audible) and by changing the shape of your throat, mouth, lips and tongue, and using your nose and diaphragm as well as your mouth to push the sound out, you can produce higher sounds as well as the note you are singing. Jill Purce says that, when we do this powerful vocal yoga and meditation, producing harmonic sounds which are uniquely in tune, it retunes the body - rather in the same way as playing a musical instrument helps to keep it in tune and maintain its tone. Whereas if you don't play a musical instrument for a long time, it gets that painful 'honky tonk' sound and may need to be repaired as well as tuned, to restore it to its former resonance. So overtone chanting, which Jill pioneered in the West, can be highly beneficial for the body, even more so than ordinary singing.

Also, as we discovered, if you keep doing it, it changes the whole way your body resonates, meaning that both your singing and speaking voices can become much more beautiful and rich. The most wonderful thing we discovered about overtone chanting though was that, when you do it in a large group, the voices of all the other people have a powerful effect on your own body's ability to resonate, greatly accelerating the process of enriching the sounds your body can make. Also, when the group really gets going, you can hear these strangely beautiful and uniquely tuneful high-pitched whistling noises seeming to hover above everyone, without appearing to come from anyone in particular. A beautiful expression of our oneness.

However, that was just the beginning! After learning overtone chanting, we embarked on Jill's unique 5-day healing mandala process. As we entered the sacred space where the mandala would be created, each of us was handed a coloured scarf which determined, completely at random (though reflecting, as it turned out, a higher order), at which position in one of

four circles of twelve people we would start. Each circle had a colour, element and multiple meanings associated with it. The four circles of blue, yellow, red and green were arranged around a white centre - the place of White Tara - the Tibetan goddess of compassion, perfected wisdom and healing, to whom this particular one of Jill's mandala ceremonies was dedicated. Over five intense days of chanting and practice, each of us moved around one by one until we had occupied every position in each circle, including its centre, and had ourselves become White Tara.

These spiralling human circles became alchemical forges in which the person at the centre of each circle was enabled - in a space filled with absolute trust, safety, wisdom and love - to confront in turn four afflictions that were troubling them and transform them into blessings, doorways to a blissful sense of who we truly are: utterly whole, utterly loved and lovable, and utterly, all-encompassingly loving.

And as we moved we chanted - not just to invoke White Tara, but to become her, seeing ourselves as creators and uncreators of whole universes of enlightened beings, equally at home with oneness and duality, receiving and radiating her blessings towards all life, and especially towards the person at the centre of each circle.

It was such a feast of love and wisdom, and to have the permission and freedom to be our true selves for a whole week (because truly, all we are is love!), without any need to hide behind our ego-facades with all their fears, doubts, judgement, mistrust and separativeness, was truly liberating. At one point, Jill - with a little secret smile - called the mandala a 'love machine', and that's exactly what it was! Also related to the Tibetan Book of the Dead, it was at the same time a map to the afterlife, a guide and a doorway to liberation in this life, a teaching on how the universe really works, and a healing - a wiping away of all our tears and sorrows. We were completely knocked sideways by the sheer genius of it all, so you can imagine how intrigued we were to find out how Jill conceived this stupendous gift to humanity.

Jill's story goes back more than 50 years to when, as a very young person, she developed an all-consuming interest in spirituality. Like many natural mystics, she felt strongly the teaching and healing power of nature, and was particularly fascinated by water, observing it closely to see how it moved and flowed, and how eddies and vortices formed and dissipated. Instinctively she knew that many lessons could be learned from water, lessons that would provide wisdom on many levels. And indeed, as it turned out, her observations of water in motion and her understanding of spirals led to her book The Mystic Spiral: Journey of the Soul (1974), and gave her a perspective on mandalas that would literally revolutionize lives.

Music, meditation, and healing too, held a strong early fascination for Jill (her mother was a concert pianist and her father a surgeon), and in the early 70s she made contacts that proved pivotal for her life's work, which blends together three main strands: an understanding of spirals and the rotatory principle in nature, art, spiritual traditions and psychology; a deep study of the wisdom of Dzogchen within Tibetan Buddhism; and an unusual grasp of the human voice and its power to heal. From 1971, Jill lived and worked for several years with the German composer Karlheinz Stockhausen, who in 1968 wrote a piece for six singers called Stimmung - the first ever Western exploration of vocal overtones. And she started studying with Tibetan lamas, as well as the umtse or chantmaster of the Gyuto monks.

So it was that, in the 70s, Jill began her pioneering work with overtone chanting and reconnecting people with the lost and forgotten power of their own voices. At the time, no one else was doing this, and her work, which she called Healing Voice, inspired a worldwide sound-healing movement which, as you probably know, is huge today. Until 2000 she worked with voice, ceremony, sound and shamanic healing methods to enable people to make massive changes in their minds and lives. These events often involved Jill undertaking quite energetic and vigorous shamanic practices with her students, so as to free them from the problems that were blocking their growth. But then, in 2000, although not while teaching, she broke her back and, while it was healing, she realised she needed to find a way of working with people that was gentler on her body.

An important part of her life was daily swimming (a practice she continues to this day), and she made it her habit while swimming to connect with the water spirits and dedicate her swims to some question to which she needed to receive an answer. One day, while swimming and holding the question of how she could find a less physically demanding way of working with people, a revelation began to dawn in her mind. She saw how, as a development of the first ceremony that came through her in 1984, she could develop a quite new form of ceremony, in which human beings themselves formed the various parts of a mandala that could then be used to transform, illumine and heal them. The more she swam, the more information downloaded, so that she had to keep swimming to the side of the pool to make notes in a soggy notebook. Afterwards, the more she reflected on this revelation, the more she realised how extraordinarily profound it was, and how very many seemingly disparate teachings it connected and gave new meaning to. When she first told her students about it, they wondered what on earth was going on, but they stuck with it and found themselves participating in a transformatory experience quite beyond anything they had ever experienced before.

When she came home after giving her first 'new-style' healing voice week workshop, she went swimming and had the most extraordinary experience. The water felt clearer, more sparkling and silky somehow, so much so that she went to the swimming pool receptionist and asked what they had done to the water. They replied that, just a few days ago (the day she left to teach the workshop), someone had accidentally taken the plug out of the pool and all the water had drained away for the first time in 25 years and had to be replaced. In a moment of stunned illumination, Jill realised that the water spirits, having stored their teachings for her in the water for so long, had now been liberated, allowed to return to source, having delivered their treasures to her.

Jewels for all beings

And that's how it works with all Jill's mandala/healing voice workshops. Once the mandala has done its work, the people who formed it disperse, spreading the jewels they have received out into the wider world as an offering to all beings. So what was the greatest jewel we gained from our mandala experience - the one we want to share with all of you? The awareness - more sure and certain than ever before - that our conditioned self (which some people call the ego) does not need to be a strait-jacket. It can be a cloak that we can simply shrug off at will, because we no longer need it. We can come to the party - which is what human life truly is - dressed exactly as we ARE! We'll see you there.

With blessings and so much love,
Ann, Geoff and the Cygnus Team
(c) June 2012 Ann Napier and Jill Purce
1st published in Cygnus Review